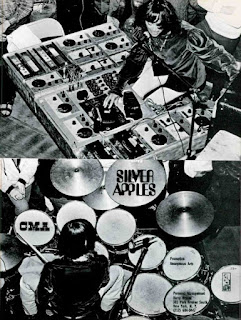 This edition wraps up the rock year 1968 and if I try to find an overarching thread, it has to be one of progression, the happy psychedelia giving way to a maturing darkness - surely due to the cultural and political upheaval of '68 - but also an embracing of eclecticism, blues and classical sitting comfortably beside the rock and soul. It is also hard not to notice everybody getting naked by the end of the year - in promotional ads throughout the trade magazines, Blue Thumb Records pushing the boundaries and Mama Cass too, in promotional photos The Turtles, on album covers with John & Yoko - nudity had clearly, and often starkly, become a "thing". The Stones made another of their great leaps forward with the release of Beggars Banquet, dropping nearly every whiff of the psychedelia they'd been heavily steeped in a year previously. The Doors added horns and flirted with "selling out" according to some by purposely aiming at the top 40. The Monkees purposely (porpoisely?) aimed well outside of the top 40 with their movie and soundtrack for Head. Wendy Carlos was making big waves with the Moog synthesizer too, although back then she was known as Walter, making her a pioneer in more than one way. Along with these big names there were also plenty that have fallen well into obscurity - take a look at the underground playlists below and notice Dirty Filthy Mud's single getting airplay on more than one of the stations... I think it's a fair assumption to say that it hasn't been played in the nearly 50 years since on classic rock radio, but listening to it, it definitely deserves to be called a classic! Some of the obscurities here though certainly found new audiences in the 21st century, such as Silver Apples who are recognized as proto-punk and proto-wave groundbreakers in many circles. And 1969 is on the horizon with even more changes to come....