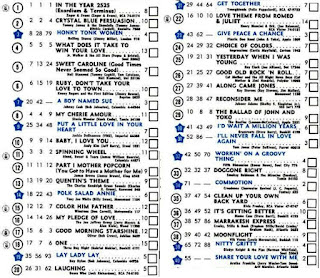 The NASA moon landing on July 20, 1969 sent waves of space fever throughout pop culture, the music charts were no exception. One of the first singles to make an explicit reference to the moon landing was Buddah's "break-in" record (a style originated and perfected by Dickie Goodman) "Moonflight" which featured snippets of pretty much every hit that had been on the Buddah label so far. The interest in space might have played a part in the current success of Oliver's "Good Morning Starshine" as well, although it comes from the musical "Hair" which was a phenomenon of pop culture all on its own in the late 1960's.

Another oddball hit is the instrumental "Quentin's Theme" by the Charles Randolph Grean Sounde. Its success can be attributed to the wildly popular gothic soap opera "Dark Shadows" which was enjoying its peak popularity in 1969. The particular storyline in the summer of '69 was centered on a werewolf curse on the Quentin character and was partially inspired by Oscar Wilde's The Picture Of Dorian Gray. The show was very popular with teens as it was often the first thing many of them watched when they got home from school and with school out for the summer and more kids watching the show, it was the perfect storm to create a top 20 hit. Eerily, the song peaked at #13... ;)