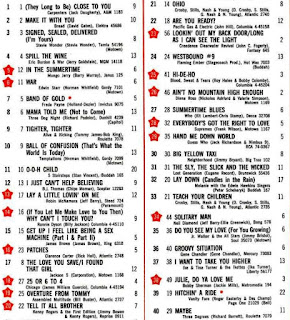 Three singles in this anniversary week's chart have both sides of the 45's credited - The Jackson 5's "The Love You Save" backed with "I Found That Girl", Creedence Clearwater Revival's "Lookin' Out My Back Door" coupled with "Long As I Can See The Light" and both sides/parts of James Brown's "Get Up I Feel Like Being A Sex Machine" which is presented here in its continuous promo version.

Neil Diamond's "Solitary Man" is the original 1966 recording (this time issued with a different b-side than the original single) - the first time around it peaked at #55 but on its current run takes it to the top 40 but not quite the top 20 (peaking at #21). A good number of cover versions/revivals also in this week's chart - Ike & Tina covering Sly Stone, Neighborhood covering Joni Mitchell, Three Dog Night covering Randy Newman, and The Assembled Multitude covering The Who, who in turn are covering Eddie Cochran's "Summertime Blues". Two other songs in the countdown were originally b-sides of other hits by other artists. Blood, Sweat & Tears' version of Goffin-King's "Hi-De-Ho" was earlier the b-side to Dusty Springfield's "Willie & Laura Mae Jones" - and the Carpenters' "(They Long To Be) Close To You" (their biggest hit, #1 for four weeks) was originally on the flip side of Richard Chamberlain's 1963 hit "Blue Guitar". Yet another song in this week's chart was originally written and recorded by General Johnson & Chairmen Of The Board and was even the b-side of their current single when Clarence Carter gave "Patches" a reworking and took it to #4 in the Hot 100 (and #2 in the R&B charts) eventually earning the songwriters a 1971 Grammy for Best Rhythm & Blues Song.