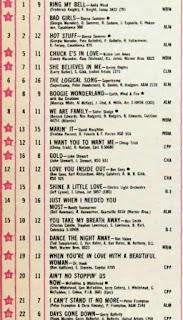 Donna Summer was the queen of disco, without a doubt, and she was a true superstar of the '70's but in the summer of '79 she was hotter than ever before as evidenced by holding down both the #2 and #3 positions in this week's anniversary chart. Also on this chart is bonafide one-hit-wonder David Naughton with his song "Makin' It" which was from the movie soundtrack for the Bill Murray comedy Meatballs. The song also spawned its own American sitcom television series - in fact, the first pressings of the 45 stated that the song was from the "hit" series of the same name, although the series barely lasted two months on air and by the time the 45 was a hit on the charts, it was long gone, having been cancelled due to poor ratings. Later pressings of the 45 scrapped the "hit" series credit and instead noted that it was featured in the more popular movie Meatballs. Naughton was actually best known to Americans from his appearances in the long running ad campaign for Dr. Pepper soda and later went on to reach his biggest success as the lead actor in the movie American Werewolf In London, in which he appeared nude and in turn prompted Dr. Pepper to drop him from their commercial advertisements.