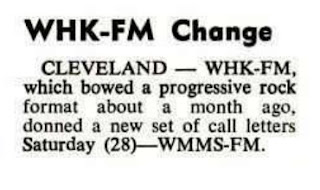 Legendary rock radio station WMMS gets its famous call letters in September '68. During their heyday, listeners would attribute different meanings to the letters; "Magic MushroomS" and "Weed Makes Me Smile" were quite popular ones but the station itself portrayed them as standing for "Music Means Satisfaction" and later "Where Music Means Something", however they really stand for MetroMedia Stereo as they were owned by the MetroMedia company who also owned other famous underground progressive outlets such as KSAN in San Francisco, KMET in Los Angeles, WMMR in Philadelphia and WNEW in New York. 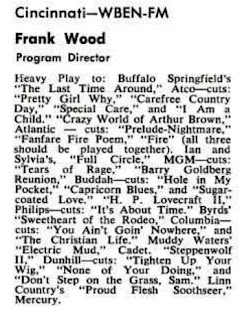 Elsewhere in Ohio, WBEN in Cincinnati (doesn't have quite the same ring as WKRP., does it?) have suggested in their late September playlist that the first three cuts on the Crazy World Of Arthur Brown's LP should be played together. I agree and have done so to open this mix! You'll also hear brand new (at the time) cuts from Jimi Hendrix, the Steve Miller Band, Steppenwolf and Janis Joplin fronting Big Brother & The Holding Company as well as a host of other bands and artists that have fallen into the mists of obscurity since these magical days of yore. Some of them, however, would become much bigger stars in the following decade as here we find The Zoo (whose "From A Camel's Hump" is included) which featured Mike Flicker on drums and Howard Leese on lead guitar - among the youngest rock artists to catch a record contract in '68, The Zoo didn't stampede up the charts, however they would later find great success with Heart. Also included is a remake of West Coast Pop Art Experimental Band's "Smell Of Incense" by Dallas, Texas group Southwest F.O.B. who heard the song when they opened for WCPAEB earlier in the year. They were so knocked out by it, they decided to record it themselves and made the song a commercial success by taking it up to #56 on the Billboard Hot 100 chart. The F.O.B. in their band name stands for "free on board", a phrase that basically means the buyer/receiver is responsible for shipping costs, which is absolutely uninteresting - however, what IS interesting is that the band included future 70's soft rock superstars England Dan & John Ford Coley. Southwest F.O.B. even opened for Led Zeppelin once. Of course, a couple of lengthy LP cuts are also featured, one from Ford Theatre as well as a powerful track being played on many underground progressive stations to close this set from Patty Waters that is not for the faint of heart but which spoke to this turbulent era profoundly with a stunning liberation of bottled up emotion.