By July 1968, there are at least 50 radio stations in the United States broadcasting progressive rock programming. Canada is hip as well with CHUM-FM in Toronto and CKLG-FM in Vancouver filling the airwaves with the finest album cuts. Some stations are reporting that their audiences have grown 10 to 15 times larger than before they started the rock programming. Yet there are still a handful of stations that aren't really grasping the concept and although they may be playing album tracks, they're having trouble shaking the top 40 format and are still playing commercials and jingles. Their disc jockeys may still be stuck in a rut with their rapid fire patter and fear of dead air or they may swing too far the other way and assume a hippie character and end up sounding like they're mocking the listeners. And just who are the listeners? Apparently they have good hygiene. 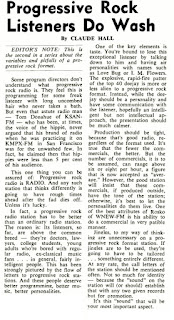 July '68 also saw some major rock album releases; The Band's classic debut "Music From Big Pink", Cream's "Wheels Of Fire" and The Doors' "Waiting For The Sun" among them. There were also some releases that might not have soared the charts but did indeed give some future superstars early exposure. One of those featured in this month's mix includes Blondie's iconic vocalist Deborah Harry as a member of The Wind In The Willows. The band Hearts And Flowers, whose remarkably lysergic "Ode To A Tin Angel" is also featured, had among its ranks future Eagles founding member Bernie Leadon. A couple of other songs in this mix would later become big pop hits by other artists; Nilsson's original "One" was covered successfully by Three Dog Night and the fantastic "Black Magic Woman" by Fleetwood Mac would later become a signature song for Santana. One noteworthy album that was released in July and would stay in the upper end of the album chart for years is the second album from Iron Butterfly, "In-A-Gadda-Da-Vida" and the title track is presented here in its glorious entirety, drum solo and all.