In lieu of the top 40 chart mixes I've been doing, I felt like trying this idea out instead. The chart mixes are fun.... to a point, but they also limit my enjoyment as a mixer (mixist? someone who mixes?). I ran into a couple of brick walls - one, being forced to put an inappropriate song in between two that fit together better and two, songs that get repeated chart after chart (after another dozen charts) and, as a listener (listenist? someone who listens?) I'd rather hear a constantly fresh rotation of songs instead of repeats. Ultimately, I felt like doing the fixed charts was not giving me the opportunity to do the thing that I get the most fun out of; sequencing and blending songs together to create a listening experience that flows. So, the idea is the jukebox (at the local bar, the pizza parlor, the soda shop, all the places one would have found a jukebox in the USA) was regularly restocked with the latest records - some were instant hits on the charts, some took a while to simmer, some never reached great heights. No boundaries, these mixes will include pop, soul, country, easy listening, the good, the bad and the cheesy, just like the real top 40 charts but now with added flexibility. :) The next chart mix I would have shared would've been from August of 1971, so that's where I'll dip in with this proposed series. 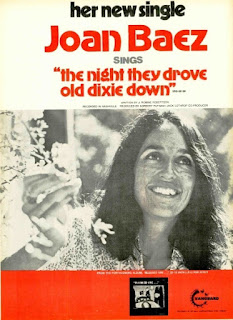 One of the bigger hits in this mix is Joan Baez's cover of the Band's "The Night They Drove Old Dixie Down" in which she didn't change the protagonist character's gender but she did change some of the other lyrics, never having looked at the actual lyrics and going by what she unknowingly misheard learning the song from the Band's LP. Her version hit #3, giving her her highest chart placing and her only top 40 hit. 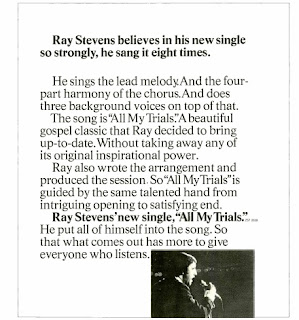 Ray Stevens often gets put in the comedy/novelty artist box, but he definitely released his fair share of fine straight ahead pop music, including this version of the traditional West Indies lullaby. Unfortunately, it only reached #70 on the pop chart though it really deserved better. 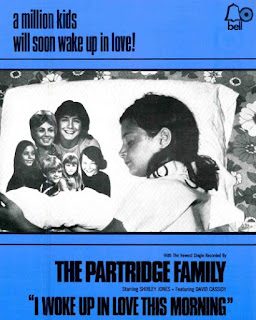 The fourth single from the Partridge Family was their first to not crack the top 10, peaking at #13. 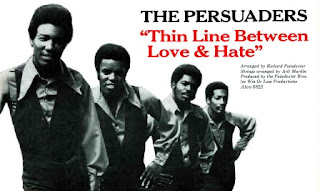 New York City's The Persuaders had their biggest pop hit with "Thin Line Between Love & Hate" which reached a peak of #15 and was eventually covered 13 years later by The Pretenders, although Chrissie Hynde's band only took their cover version to #83 in the summer of '84.

The mix starts off with the very first single I ever bought of my own accord with my allowance money, by The Stampeders (from Calgary) with their hook filled "Sweet City Woman". I also had the Tommy Roe single included here as well as the Joan Baez, Partridge Family and Bobby Sherman singles - heh. During this time period, I was out with my Mom on grocery shopping day and we stopped at the department store and I wanted the Paul & Linda 45 badly. BADLY. Something fierce, as they say. Mom informed me that I had too many records already. In that regard, she had no idea what was to happen in the years to come! Heh-heh. I pleaded my best case, pointed out the bargain since the song was almost like having a whole album side, it was three songs in one! But, no, it was not to be and I didn't get my own personal copy of the song until I purchased the Wings Greatest compilation, seven long years later in '78. "Uncle Albert/Admiral Halsey" remains in a four way tie for my favorite song ever. It never fails to evoke the era for me, hearing it on the radio and being mesmerized by its brilliance. I still love it now as much as I did then.

Two songs here from Kris Kristofferson, one on his own and one as a cover by Ray Price. Other covers in this mix include Helen Reddy's take on Van Morrison's "Crazy Love", the aforementioned Ray Stevens tour de force arrangement of "All My Trials" and Joan's revival of The Band, Donny Osmond's #1 remake of Steve Lawrence's also #1 "Go Away Little Girl" from 1963, and Andy Williams doing one of the first remakes of Leon Russell's "A Song For You". Andy's version actually gave the song its biggest exposure to date with the singles success on easy listening radio (reaching the adult contemporary top 40 chart) and several performances of it on widely viewed television shows. One single in this mix, "Them Changes" by Buddy Miles was actually released earlier in 1970 but only reached #81 - the same exact version was rereleased a year later and punched a little higher up to #62.