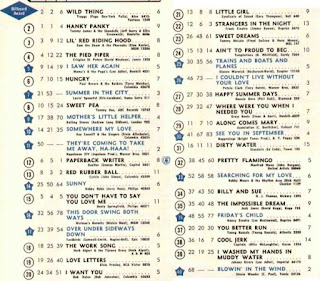 Napoleon XIV storms into the top 40, jumping from #50 to #11, but the record is not without controversy as doctors and nurses in the mental health field voice their complaints about the song's content, causing some radio stations to stop playing the record. There's a healthy number of what would later be classified as garage-psych classics in this chart; Standells' "Dirty Water", Syndicate Of Sound's "Little Girl", Yardbirds' "Over Under Sideways Down" and of course the two songs at the top of the chart, the Troggs "Wild Thing" and Tommy James & The Shondells' "Hanky Panky" which was originally released under just the Shondells moniker as far back as 1963.

The Troggs 45 is the only single to simultaneously top the US pop chart on two different labels, Atco & Fontana. This was due to a dispute, which ended up in court, over which label had the US release rights. Both labels had a strong defense and the case took a long time to settle. Long after the single had dropped off the charts, Fontana was crowned the legal winner, although Atco had probably sold more copies of the single since it also contained the Troggs' follow up American hit "With A Girl Like You" on its b-side with savvy buyers sensing the better deal for their wallet.