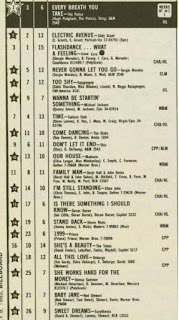 The "Second British Invasion" has fully bloomed in the US with nine UK acts in the top 20 (ten if you count Eddy Grant who moved to London from Guyana when he was 12 and formed legendary UK act The Equals when he was 19). Even further, Daryl Hall & John Oates' "Family Man" is a cover of a song by UK artist Mike Oldfield. The Kinks, who were part of the first British pop invasion of the US, hit #8 on this week's anniversary chart, their highest placing hit since April of 1965 when "Tired Of Waiting For You" hit #6. The Police have their first US #1 this week with "Every Breath You Take", which is also A&M's first #1 since Human League captured the spot a year previously with "Don't You Want Me".

Prince's "1999" was another long slow simmer, having been released in September of 1982, reaching a peak of #44, but after the breakout success of "Little Red Corvette" reaching the top 10, "1999" was re-released and is caught in its ascension here to its eventual peak of #12. The song has entered the Hot 100 four separate times in three separate decades (the other 2 entries being in January of, erm, 1999 hitting #40 and also following his untimely death in 2016 when it reached a peak of #27). "Little Red Corvette" was the inspiration for another top 20 hit this week, Stevie Nicks' "Stand Back". When Stevie called Prince to tell him she had written a song based on his "Little Red Corvette" melody, he came to the studio that night and played the synthesizers heard on the track although he was not credited (he did split the royalties with Stevie 50/50, however).