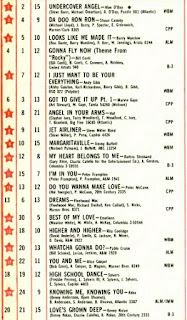 Alan O'Day gets his long deserved week at #1 with the classic "Undercover Angel". He was the writer of previous hits "The Drum" by Bobby Sherman, "Rock And Roll Heaven" by the Righteous Brothers and Helen Reddy's #1 "Angie Baby" so it's nice to see him climb to the top position with his own record. Alan O'Day is one of the rare people to write both a US #1 for himself as well as a US #1 for another artist. Sadly, Alan passed away on May 17, 2013 at the age of 72. He has a particularly special place in my heart and in my memories as he was truly a kind and generous man to his fans, especially in the internet era. Anyone could contact him and he would gladly reply back, answer questions and offer tidbits of trivia as well as help out aspiring songwriters with useful tips. I, myself, was one of those fans who reached out to him and benefited from his impressive knowledge. I even got a CD of the Appetizers album produced from the original master tapes, the same album this anniversary week's #1 was culled from, directly from him. He is deeply missed but there is satisfaction in his music living on!

Elsewhere in the chart, Shaun Cassidy takes his debut American single "Da Doo Ron Ron" rocketing upwards and it will take over the #1 position the following week, starting a nice little run of revival hits for the teen idol. Rita Coolidge also revives a golden oldie by covering Jackie Wilson's "Higher And Higher". All in all, a wonderful top 20 that brings back a lot of memories for those who were around in the seventies!