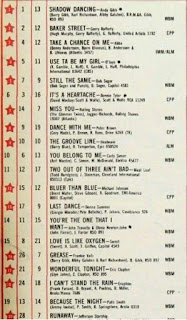 A handful of movie soundtrack songs in this week's anniversary chart... two from Grease (the title track is on the way up, "You're The One That I Want" on the way down) and Donna Summer's "Last Dance" from the disco movie Thank God It's Friday. Michael Johnson's "Bluer Than Blue" hits its peak of #12 on this chart. Sadly, Michael Johnson passed away on July 25, 2017, just a few weeks after this chart mix was originally posted. Michael, a Colorado native, was once in the Chad Mitchell Trio during the same time in 1968 as John Denver. "Bluer Than Blue" was Johnson's biggest pop hit and also reached the #1 position on Billboard's Adult Contemporary chart.

It's funny to think back on contemporary remarks that the Rolling Stones were a bit long in the tooth at this point, having been on the charts for close to 15 years - ha - but they were certainly staying afoot with the times with the rather genius blending of rock and disco on "Miss You". Rod Temperton's genius was in full effect too with Heatwave's "The Groove Line", a track that still makes me want to dance. Sweet take a last breath of US success with their final top 40 entry "Love Is Like Oxygen".