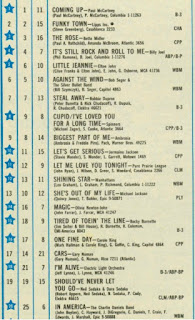 Paul McCartney gets his seventh US #1 as a solo artist with "Coming Up" but, oddly, it is the live b-side version that earns the ranking! Radio, by far, favored the live version which was not as "new wave" sounding as the one-man-band solo version. Columbia Records, his new US record label at the time, even scrambled to press up a one-sided 7 inch to stuff inside the McCartney II album covers with a sticker on the shrink wrap to let consumers know the version they heard on the radio would be included with their purchase of his latest album.

Further down the chart, new wave was creeping its way into the mainstream with Gary Numan's "Cars" - a song that had been played on progressive rock stations since late 1979 but simmered and slowly gained traction on pop radio over the course of 1980 until finally landing in the top 40 and peaking at #9. It would be Numan's only US chart hit. The new wave sounds had met strong resistance in the US charts, perhaps seen as a fad and in the light of the growing backlash against disco, radio was being overly cautious. Billy Joel seems to address these concerns with "It's Still Rock & Roll To Me" currently sitting at #4 but on its own path to eventually reach #1 for two weeks. Musical conservatism is notably strong, perhaps also as a reaction to new wave, with revivals of "One Fine Day" from Carole King and "Cupid" by the Spinners in the top 20 alongside another tip of the hat to older sounds in Rocky Burnette's "Tired Of Toein' The Line" (Rocky being the son of 50's rocker Johnny Burnette of "You're Sixteen" fame). Charlie Daniels Band were also being conservative, albeit in a completely different fashion, with the curmudgeonly xenophobic offering of "In America". The Xanadu soundtrack finds two of its songs in this week's top 20, Electric Light Orchestra's "I'm Alive" and Olivia Newton-John's "Magic". The title track from the soundtrack of Bette Midler vehicle The Rose also sits nicely in the upper reaches of the chart.