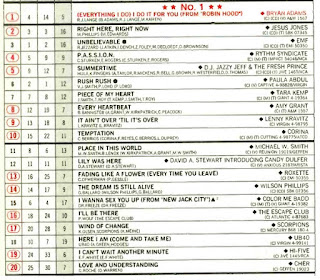 Bryan Adams' "Everything I Do (I Do It For You)" becomes the fastest climbing song to reach #1 since USA For Africa's "We Are The World" six years previously. It took Bryan Adams five weeks whereas it only took four for "We Are The World" to hit #1. This was Bryan Adams second #1 single up to that point, his previous one being "Heaven" - notably, both were from movies; "Everything I Do" being featured in the "Robin Hood" film and "Heaven" from the mostly forgotten "A Night In Heaven" movie.

Singles sales in general were in a slump, many of the top 20 hits here weren't even available as vinyl 45's as they were in the middle of being phased out completely and the cassette single was getting the marketing push. Consumers weren't thrilled with the "cassingle" as many thought it was a wasteful format since it was the same size as a regular full length album cassette. CD singles weren't catching on fire either as they were usually more than double the price that was expected to pay for a single. As such....I'm taking these gloomy days for the single as a sign to start the cycle back over and the next chart mix will take us back to 1966 where we'll begin a journey through the years again.