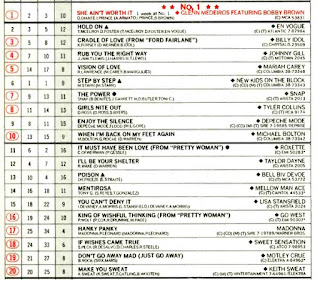 Four singles in the top 20 are from movie soundtracks, two of them from Pretty Woman (the Roxette and Go West singles). Mariah Carey is moving fast to the pole position with her debut single "Vision Of Love", which was also the first of five consecutive number ones from Mariah. From the start, her career was aggressively marketed by her record label who were pushing to get her established on pop and black radio before the next Whitney Houston album was released, which was due in September.