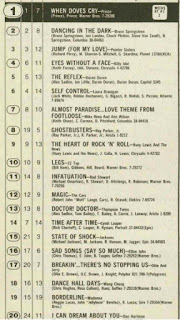 The first thing that strikes me when I look at this chart is the dominance of MTV - so many of these songs instantly put the video in my mind's eye. Five big hits from movie soundracks here; Prince's iconic "When Doves Cry" topping the list, Ray Parker Jr.s' "Ghostbusters" theme racing to the top and "Almost Paradise" from the Footloose soundtrack with a solid top 10 placing, Ollie & Jerry's "Breakin'... There's No Stopping Us" from the Breakin' movie and Dan Hartman's "I Can Dream About You" (originally written and intended for Daryl Hall & John Oates to record) from the Streets Of Fire soundtrack. Madonna's second chart single and first top ten hit, "Borderline", is falling down the charts while Bruce Springsteen is being denied a #1 by the incredibly strong presence of Prince. It's almost impossible to overstate what a widespread impact Prince was having at this time on American culture. "When Doves Cry" would stay perched on the top for five weeks and it would be his biggest US chart single of his career. It is a remarkable single for many reasons, not the least of which is the fact that it has no bass line.