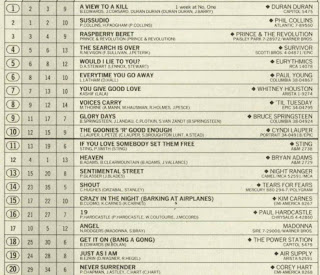 Duran Duran make chart history this anniversary week by being the first artists to ever take a James Bond movie theme song all the way to #1. Both Carly Simon and Paul McCartney & Wings came very close taking their Bond themes to #2, but Duran Duran is the first to go all the way. Also, notably, Duran Duran continue a streak with "A View To A Kill" of being the sixth consecutive #1 by a foreign artist - the previous five acts at #1 were all UK except for Canadian Bryan Adams. Cyndi Lauper and Bruce Springsteen are also on a roll, with both artists racking up their fifth consecutive top 10 hits. Bruce's "Glory Days" is also the fifth top ten single from his Born In The U.S.A. album, ranking him neck and neck with Lionel Richie's five top ten singles from "Can't Slow Down" - however, Michael Jackson was still in the lead with seven top tens off Thriller.