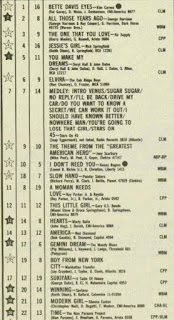 Covers and revivals take up more than a quarter of this week's top 20 with songs that didn't hit the first time around ("Bette Davis Eyes" first recorded by Jackie DeShannon in 1974 and "Winning" first recorded by Russ Ballard in 1976) and cover versions of songs that are coming back into the charts again ("Sukiyaki", "Elvira", "Boy From New York City" and the plethora of hits in the Dutch sensation that is Stars On 45).

The Pointer Sisters enter the top 10 with "Slow Hand", which is their third top ten hit but it is also producer Richard Perry's seventeenth top 10 smash. This week also finds one song from the movies (Neil Diamond's "America") and one song from television (Joey Scarbury's "Theme From 'The Greatest American Hero'").