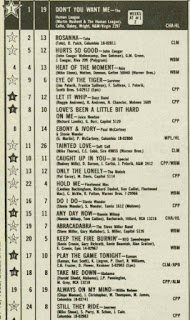 "Tainted Love" by Soft Cell finally enters the top 10 this anniversary week after first entering the Hot 100 chart half a year, 26 weeks, earlier and 10 months after the single topped the UK charts. It is one of three former UK #1's in this week's American top ten ("Ebony And Ivory" and "Don't You Want Me" are the other two). The bulk of the remainder of this week's chart is very American indeed with country and rock keeping a good foothold against the so-called "second British invasion". Even UK prog-rock supergroup Asia are sounding quite American with their hit "Heat Of The Moment". .38 Special become the first Southern rock band to reach the top 10 since Charlie Daniels Band took "Devil Went Down To Georgia" to #3 in 1979. But, still, the slow and steady climb of Soft Cell is a harbinger of things to come...