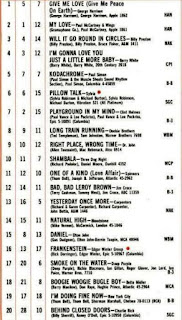 Two solo Beatles were holding down the top two spots on this chart, Paul McCartney had taken "My Love" to #1 the previous week and he steps down one position as George Harrison jumps from #5 to become this week's #1. The Beatles connection doesn't end there as the #3 spot is held by Billy Preston who is the only artist to be credited on a Beatles recording other than the band's four members. The Beatles' #1 "Get Back" single is credited on the label as The Beatles with Billy Preston. "Will It Go Round In Circles" will also eventually hit #1 and gets my pick for favorite single of this week, although it was a tough choice with most of this chart full of top shelf contenders. I've noticed that mixcloud wants to change the chyron in the mix during "Boogie Woogie Bugle Boy" to indicate that it's the Andrews Sisters, but no, this is indeed the Bette Midler cover version of their 1941 hit.