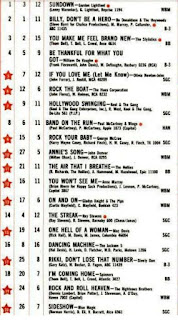 Paul McCartney makes his own appearance at #8 with the title track from his & Wings' "Band On The Run" LP and then a second appearance as half of the songwriting partnership on Anne Murray's cover of the Beatles 1965 album track "You Won't See Me" which logs in at #12 on this week's chart. The newly reformed Righteous Brothers make an entry at #19 with "Rock And Roll Heaven" written by Alan O'Day (who also wrote Helen Reddy's "Angie Baby" and would have a major hit of his own with "Undercover Angel"). The song was originally recorded by Climax (of "Precious And Few" fame) and paid tribute to Jimi, Janis and Otis but it failed to chart. When the Righteous Brothers recorded it, the producers Dennis Lambert and Brian Potter added a new verse to include recently departed artists Bobby Darin and Jim Croce which replaced an original verse memorializing Buddy Holly and Ritchie Valens in the Climax version. Perhaps it was felt that Buddy and Ritchie already got their due respect in Don McLean's "American Pie". Producer Thom Bell has two of his productions in this week's top 20: The Spinners' great "I'm Coming Home" and The Stylistics' legendary classic "You Make Me Feel Brand New", both written by Bell with Linda Creed.