Two hours of selections from singles that made their way into American jukeboxes during the month of December in 1978. (*) an asterisk in the chart position means it didn't chart in Billboard but did chart elsewhere (either Cashbox or Record World).

Here is another two hour set of selections that would have been heard on US progressive underground rock FM radio stations during the month of May in '69. Perhaps the most noteworthy album release of May 1969 is The Who's rock opera "Tommy", a concept double album in its truest form. They were not the only band taking great strides forward, as Procol Harum's new release, the great "A Salty Dog" album was also released and is represented in this mix by its title track, an atmospheric masterpiece with some lovely moods and brilliant string arranging which I imagine might have inspired a mood or two on Kate Bush's "The Dreaming" album.At least, that's how it often strikes me and I could certainly be wrong, but these mixes are made with context in mind and I present them hoping to share not only historical context but also my own personal take on the matter! Heh. Since I'm writing in that mode at the moment, I feel compelled to say that Procol's drummer B.J. Wilson is my all-time favorite drummer - so imaginative and dynamic, fluid and deeply musical. It's why I put that particular Who sequence after "A Salty Dog" - Keith Moon's opening fills in "Amazing Journey" are among my top Moon moments and another great example of how crucial a great drummer is to a rock band. Drummers get a lot of jokes made about them among musicians, but it's really not fair, ha, I love drummers, they're often very musical indeed!

Elsewhere in the mix we find future 70's superstars in American Blues, which is basically ZZ Top with Billy Gibbons switched out for Dusty Hill's brother Rocky. The Sallyangie is brother and sister duo Mike & Sally Oldfield, whose names would certainly become more well known as the years passed. Many other artists in this mix would also refine and shape their careers in the not so distant 70's: Linda Ronstadt, Keith Emerson (here with The Nice), Ted Nugent (here with the Amboy Dukes) among them, but we also hear the first American radio exposure of greats like Mickey Jupp with Legend as well as Canterbury pioneers Caravan. Sadly, a good chunk of the artists featured in this mix would quickly vanish away with the sixties, only remembered in the misty memories of the faithful. There aren't many other places you're going to hear Green or The Last Ritual these days! I hope you enjoy this edition as much as I enjoyed stitching it together!

Two more hours of selections that would have been heard on US FM freeform underground radio stations, this edition featuring songs from the month of April in 1969.


Two more hours of album selections that would have been heard on underground freeform US FM radio stations during the month of March 1969. 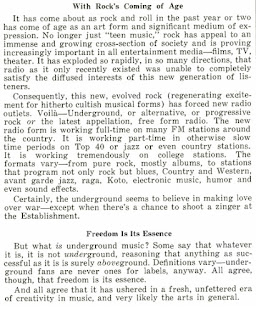 1969 kicks off with a couple of milestones. In radio, the progressive freeform underground format gets it first 24 hour AM station with WHMC serving the Washington, D.C. area, though other AM stations had been broadcasting rock in limited blocks, usually an hour or two around midnight. WHMC, billing itself as "Radio Free Washington" was short lived however, perhaps because a big draw for the format was that it highlighted the burgeoning acceptance of stereo as the preferred way to listen to the new rock music and AM just wasn't there yet.

The more important milestone, however, was on the music front as January '69 saw the introduction of Led Zeppelin to underground airwaves. The record labels had become increasingly hip to underground airplay equaling LP sales and Atlantic had furnished many progressive stations with a white label acetate of the debut Led Zeppelin album a good month before it's actual release in stores. Because it got such heavy airplay before its release, it outsold Cream's new album, released at the same time, in many markets. Led Zeppelin would continue to shake up the rock scene, both musically and marketing wise, for years to come. Another artist that would become one of the biggest superstars of the 70's saw his first airplay on many stations in January as well - Elton John with his "Lady Samantha" single, though it would still be a year before he truly had his breakthrough. The Beatles were in full force with the White Album still topping the charts and a new soundtrack album with a clutch of some more new songs and if that wasn't enough, John and George had solo albums going too (which were very underground indeed). Many songs in this month's mix have stayed classic rock staples: The Zombies' "Time Of The Season", Bob Seger System's "Ramblin' Gamblin' Man", and Creedence Clearwater Revival's "Proud Mary" in particular. This mix also contains a couple of fantastic covers that really deserved to stay on classic rock radio; Tiny Tim's dynamite take on the Jerry Lee Lewis classic "Great Balls Of Fire" and Dion's brilliant reworking of Hendrix's "Purple Haze" - these two songs may seem on the surface to be a bit kitschy or have an air of novelty about them, but really, they hold up so well still to this day - at least I never get tired of hearing them! All in all, a great kick off to a watershed year in rock and one that starts to show solid signs of how the 70's would start to shape up.